Edge Of Eternity Review (PS5) – Edge of Eternity comes from the love of a small team making an ambitious project.

This type of combination usually means that the end product suffers from limitations in both budget and technology. And, like many before it, Edge of Eternity certainly does suffer from these same shortcomings, but still features some unique quirks that make it worth your while.

A brother and sister, named Daryon and Selene, respectively, reunite years after Daryon ran away and joined the military.

Unfortunately, this reunion occurs due to unhappy news: Their mother contracted something called the Corrosion, an incurable disease that started spreading across the land.

Selene claims she knows how to find the cure for the Corrosion, and she convinces Daryon to accompany her on the journey to obtain said cure.

The writing in Edge of Eternity deserves its own mention just because of the kind of things it says and talks about.

Many of the story beats follow simple tropes, but most of the characterization and character banter keep the experience feeling worthwhile.

The team shows the liberties it takes early on by writing characters ripping on each other by mentioning a deceased parent. It gets campy at times, but it’s the good kind of campy. 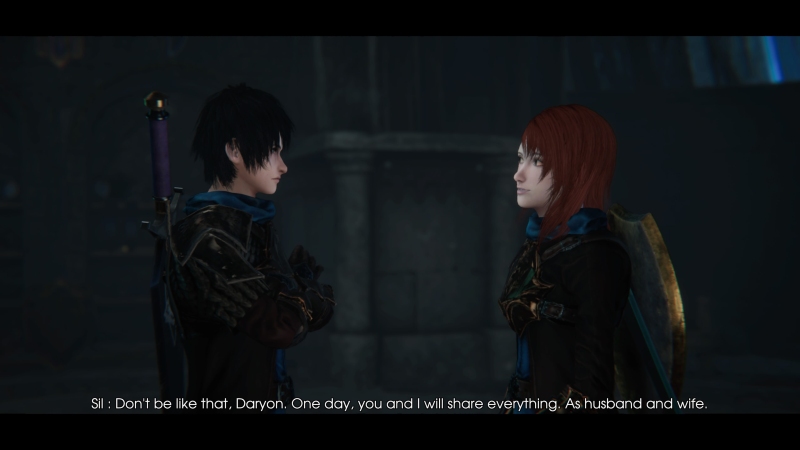 To complement this, the voice work comes across in a similar polarity to the writing. All of the voice actors deliver their lines like semi-seasoned performers, nailing as many lines as they slack on.

Concurrently, the banter dialogue tends to come across more organically, and the actors sound like they enjoy delivering those exchanges as well.

Like the writing, nothing inherently degrades the complete package, but not all parts share the same integrity.

Possibly the most glaring aspect of the game is its visual presentation. Character models look like they come from a PS3 game, but textures come from modern games.

It makes for an odd combination, and it never truly goes away, but it slowly becomes customary.

I started to ignore it, especially since you spend most of the time with Daryon and Selene, who looks much better than everyone else. However, it sometimes looks so glaringly off that it reminds you of its past inconsistency. 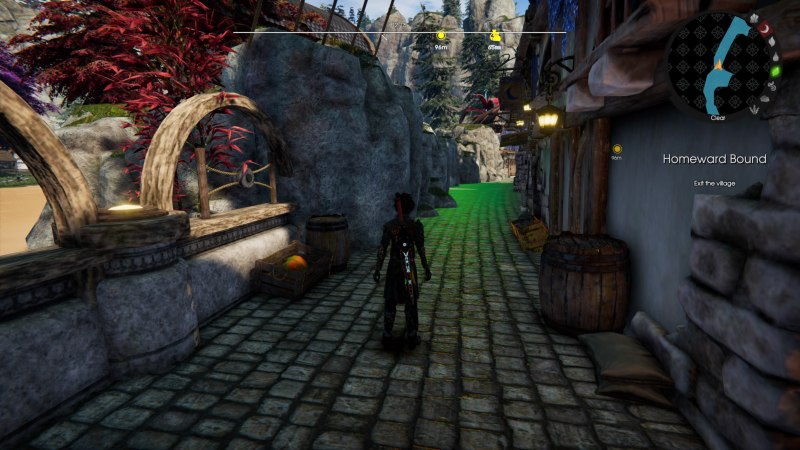 However, Edge of Eternity does excel in its lighting. Vivid shadows extend off all structures as the day-night cycle passes by, and evening lights in towns glow in the darkness of the night.

At the same time, glitches still appear on occasion, but they only disrupt the experience visually. Nothing keeps you from what the game tries to accomplish.

The rest of the game’s audio does just enough to move things along. Minor footfall sounds accompany each step, fire attacks give off a crackling burst, and the strange creatures emit sounds that oddly feel those fictional creatures would make them.

Exploring the maps quickly becomes one of the focal points of Edge of Eternity. You find sprinkled around the map various materials for crafting, treasure chests, and the occasional puzzle to solve.

Apart from fighting with creatures, nothing gets in your way when it comes to exploration. The game wants you to run around and find stuff, and it always feels cool to do so, especially when you unlock mounts to run around even faster. 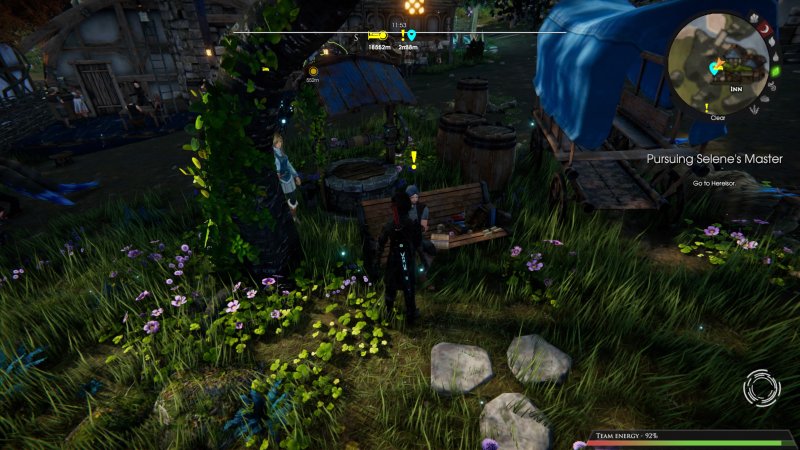 You find tons of side quests sprinkled around the map, and many of them contribute to more than giving you more experience and rewards. Several allow you to use the mounts I mentioned earlier, and others open up little nooks to explore.

You can certainly blitz through the game, especially on lower difficulties, if you so choose. However, higher difficulties require you to do every side quest plus grind fights, because every enemy hits that much harder.

You then use those materials to build weapons and armor. Unfortunately, it takes a long time before crafted items start to truly matter enough to use.

While this limited crafting system doesn’t offer much in the types of weapons you can use, it complements how you develop those weapons.

Simple Development At Its Best

Each weapon includes its own experience bar, which levels up the same way you do by fighting in combat. Characters continue levelling, but weapons only level up so many times before they top out.

Doing so takes time, and you find yourself not wanting to swap out for new weapons for insignificant upgrades. You only use new weapons when the time it takes to invest in their development pays off well once fully developed.

Your character development depends on two things: base stat increases through combat and equipping skill shards. Each character has short paths, which look somewhat like a simplified version of the Sphere Grid in Final Fantasy X.

Each slot on that path has different colored slots to equip these skill shards.

These paths only include a handful of slots, so choosing which shards you use plays heavily into how your character develops. Each character has three of these aforementioned paths, one for offense, one for defense, and one for support. 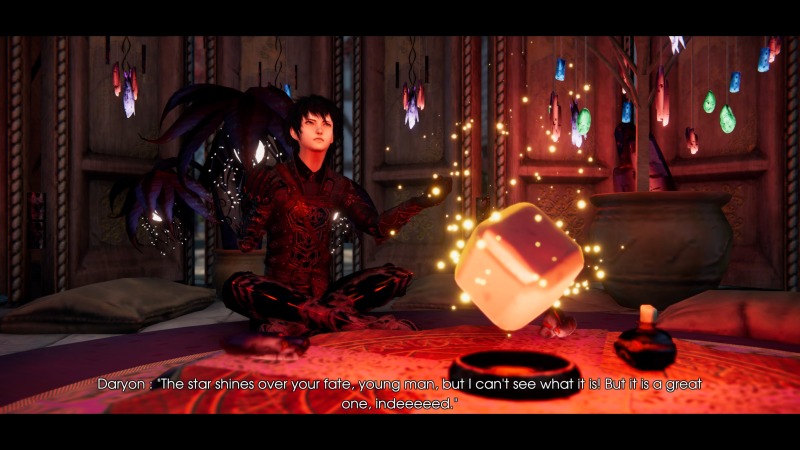 The game allows you to swap them out at any time outside of combat, allowing you to make changes based on every fight. If you fall in combat, the game lets you either retry the fight or start from the previous save, so save often.

This system is simple in its execution, but it includes enough shard variety to keep you thinking.

Having said that, I wish the game demanded more manipulation of this on normal difficulties. At the same time, higher difficulties demand that you make changes regularly. As such, every player type gets a solid selection of difficulties to choose from.

Above all, combat makes the imperfections and technical issues worth weathering. Enemies wander the map, and you attack them to initiate combat.

This opens up a battlefield, which stays in the specific terrain you find yourself, and the field divides into a grid of octagons. Up to three enemies or party members can inhabit one octagon at a time.

However, enemies and party members cannot occupy the same grid piece at the same time.

R2 gives you a traditional attack/defend/move menu while L2 opens up a menu dedicated to equipped spells and items. Combatants take turns in an active-time battle rotation, which works in a traditional fashion for the genre.

Combine this with how the gridded layout of combat works, and you get an end product that allows you to control the field or be controlled by enemies.

The more complicated enemies become and the stronger you become make this dichotomy even more significant as you progress. 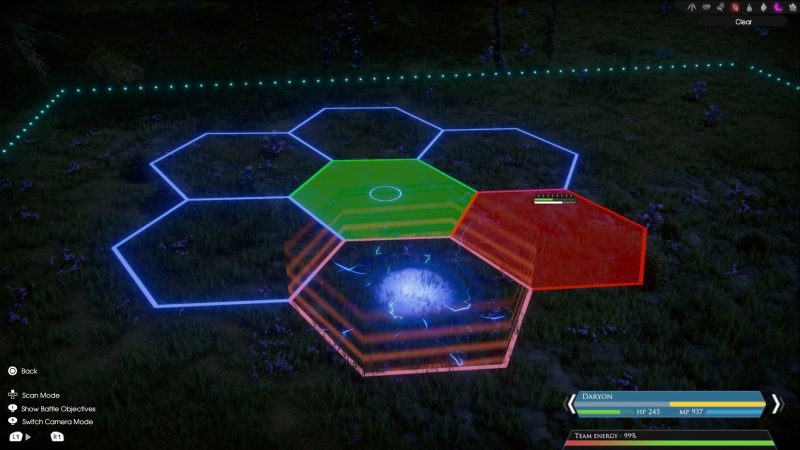 The coolest part about this game’s combat comes with how it handles casting spells.

Activating a spell initiates a cast time with its own active-time bar, and any attacking adversary can interrupt it if enough damage is done before the end of the spell’s cast time.

This holds true for both party members and enemies, meaning that you can just as easily interrupt them as they can interrupt you.

The icing on the combat cake comes with the ability to speed up combat. Without it, the pace of the game suffers greatly.

I grow bored of the time it takes for tactical games to execute commands; and while Edge of Eternity leans more into the active-time battle side, my ability to speed through the strategic parts quells my natural impatience nicely.

Other gamers love tactical combat, so I applaud the development team for making it an in-combat option available at all times for all player types.

Edging Out The Issues

All in all, Edge of Eternity delivers an obvious passion project filled with ambitions and flaws.

The issues play a large part in the overall experience, but none of them stop you from playing the game that the developers want you to play.

With fun, mindless exploration and simple yet customizable combat, RPG fans should give it a shot. It won’t make you forget any of the bigger RPGs out there, but you’ll certainly enjoy your time with it.

The PS5 Has Outsold Dreamcast, PS Vita And Wii U In The UK