These days, in addition to Gamescom, the event of SOE Live 2014 in Las Vegas and during these events we have been able to learn many details about the future of Landmark and its brother EverQuest Next. During the Landmark conference, which you can see complete belowthe new additions that will arrive in the game this year have been revealed next August 27 like combat, weapons and PvP and soon also monsters.

The game has come a long way since they let players in. Many tools have been improved, the interface, water and swimming have been added, but the time has come to add a more violent and visceral point. It’s time to add combat to this game of construction and exploration.

In two weeks they will add the fight to the Landmark beta. All players will become mortal and will now have 3 new attributes. Armor, health and energy. The armor that will protect our health bar and the energy that will allow us to use combat abilities. In order to equip ourselves with these combat abilities, the first basic weapons that will give us these abilities have been included in the game. The bow, the staff and the sword. Each of these weapons with a main attack and a secondary attack. These basic weapons will have to be crafted by the players and others will be introduced later. epic weapons that can be obtained as loot or set weapons which can also be created.

Coming soon will also arrive armor and the renewed crafting system. Armors will have different bonuses and will reward different playstyles.

All this equipment and the combat will help us soon to face a great variety of monsters that will populate the lands of Landmark. 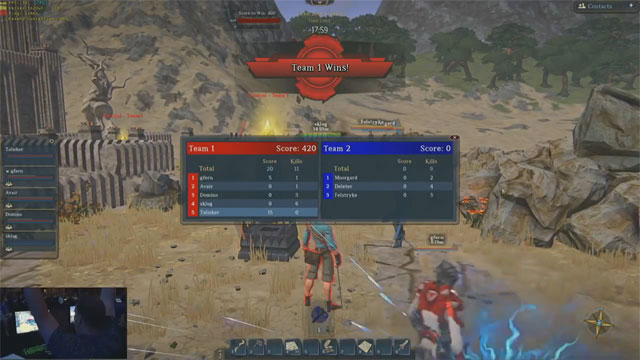 On August 27 will also arrive the PvP to Landmark. PvP in Landmark will be consensual and will take place within the plots of each player where we can set our PvP rules. Deathmatch, Team Deathmatch or Point Capture. Basically what they are offering are the tools to create our own PvP scenarios. And with the creative ability of the community we’re sure to have some amazing creations soon. And to add a more interesting point to the PvP scenarios we can also craft mines and use them on our PvP terrain.

If everything was not enough on August 27 they will also arrive interactive objects such as teleports, springboards and moving platforms.

All these and other tools that will come, such as the intelligence editor for monsters, will make it possible for us to really create our own game universes.

In short, a very interesting conference that you can see below in its entirety.