Part Doom and part rhythm game, Metal: Hellsinger wowed us when it launched in September. We loved slaying Hell’s fiercest demons with the backdrop of crunchy guitar riffs, double-kick-pedal drum beats, and soaring vocals from some of metal’s most prolific artists. Today, developer The Outsiders and publisher Funcom have announced a wave of news, including a sales milestone, a new free title update, and the launch of the game on last-generation consoles.

Starting today, Metal: Hellsinger is available on PlayStation 4 and Xbox One. The game was originally announced for these platforms at its initial reveal in 2020, but the last-gen versions were eventually canceled. Now, owners of last-gen consoles have access to this demon-slashing and beast-blasting adventure.

The studio also announced a new 1.5 patch, which adds a new top difficulty called Archdevil, as well as new weapon skins and combos. Archdevil ascends to the top of the difficulty hierarchy in Metal: Hellsinger, topping the three pre-existing settings: Lamb, Goat, and Beast. In Archdevil difficulty, players will face stronger demons and have no last stand to rely on. top of the new difficulty setting, players can also expect a new Elite Seraph to encounter.

To aid players in these new challenges, the developer introduced new combos through the 1.5 title update, and performing certain actions on consecutive beats grant additional fury and higher scores. The Outsiders is also giving players new reasons to return to the adventure, as each map now has one hidden Coats of Arms collectible at each difficulty level (including the new Archdevil setting). Once you collect enough, you unlock new weapon skins. 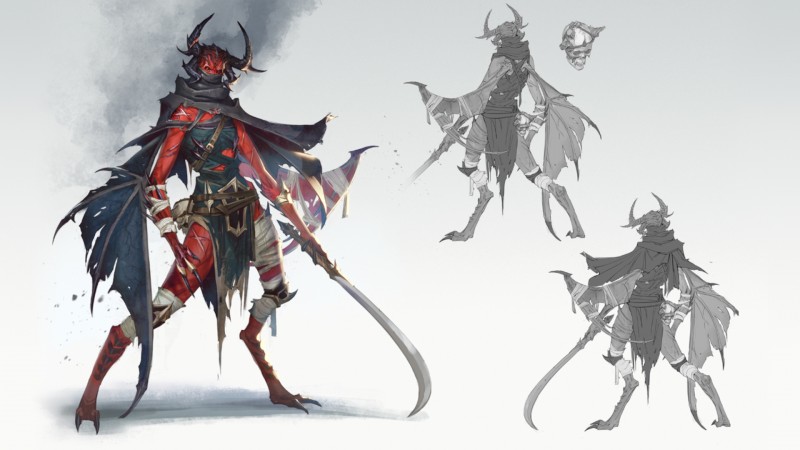 Finally, to celebrate a milestone of reaching 1 million players and its nominations at tonight’s The Game Awards, The Outsiders included a new digital art book, which is available in-game for all players. You can see one piece of concept art from that digital art book above.

Metal: Hellsinger is available on PlayStation 5, Xbox Series X/S, PlayStation 4, Xbox One, and PC. If you’re an Xbox Game Pass subscriber, the title is currently included with your subscription. You can learn more about the rhythmic shooter in our review from back in September.

Defiance will receive a new update