Nobody Saves The World Review (PS5) – Nobody Saves the World is an action role-playing game created by Drinkbox Studios.

Viewed from a top-down perspective, the game has you assuming the role of the titular Nobody, who is a character with no real backstory when you begin. As soon as Nobody Saves the World kicks off, you find out that Nostramagus has gone missin, which forms a key part of the game’s overall narrative.

The game involves multiple different dungeon’s which you unlock from collecting Stars, these Stars can be gained from doing quests, and also from completing the lower level dungeon’s.

The game has a very simple combat system that grows over time as you continue to level up. 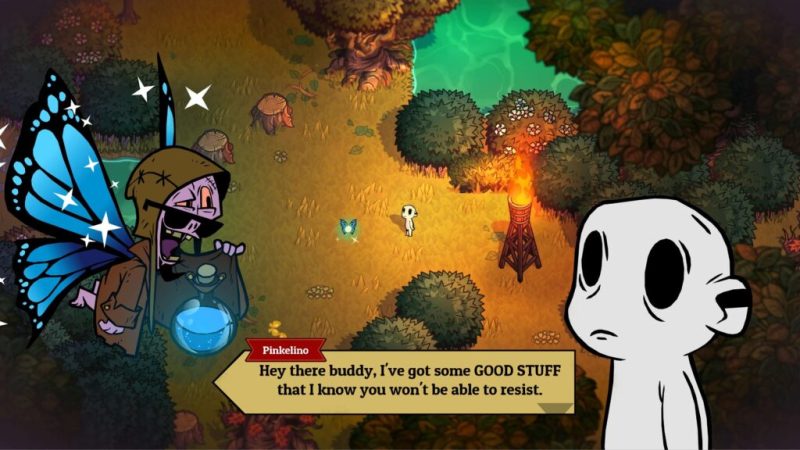 You start off completely naked, as a strange looking creature. Though this doesn’t last too long as after the first cutscene/quest.

You are able to locate a magical wand, this wand is the main focus for the gameplay with it allowing you to transform into loads of different forms. You will bump into many different characters along your journey.

These can be NPC that are just there to give side quests or in the case of Octavia an important character that you will learn about as you play through the story.

Towns have different factions also, which as you do the side quests will rank you up within the faction. This can be anything from doing races or killing enemies without damaging a certain objective.

You start off with only your normal form, and the rat as you fall into the first of many dungeons. But as you continue progressing through the talent tree, you will unlock other forms. 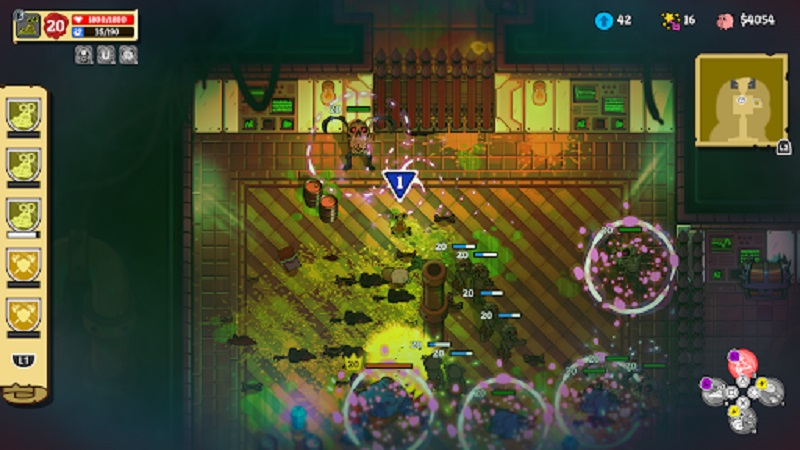 One of the most interesting one’s is the egg form that has you doing a questline to improve it. Forms are basically different types of classes with some being more defensive, while others are ranged or magical.

Once you unlock the class , you can then use upgrade tokens to buff the attacks the different forms have such as gnaw on the rat, or slap.

You unlock these by ranking up, the classes this is done by doing side quests for each class that will give them form experience points. Each form/class has its own grade and the higher the grade the more abilities you will unlock.

You will eventually be able to mix and match the different classes to make hybrid builds. One of my favourite class builds was playing as the slug, which slowed enemies down but then also adding the zombie perk.

This meant I would slow them down, bite them, turn them into zombies and have them attack the enemy for me. This allowed me to take down big hordes of enemies a little easier than if I just went in on my own.

This Isn’t Even My Final Form 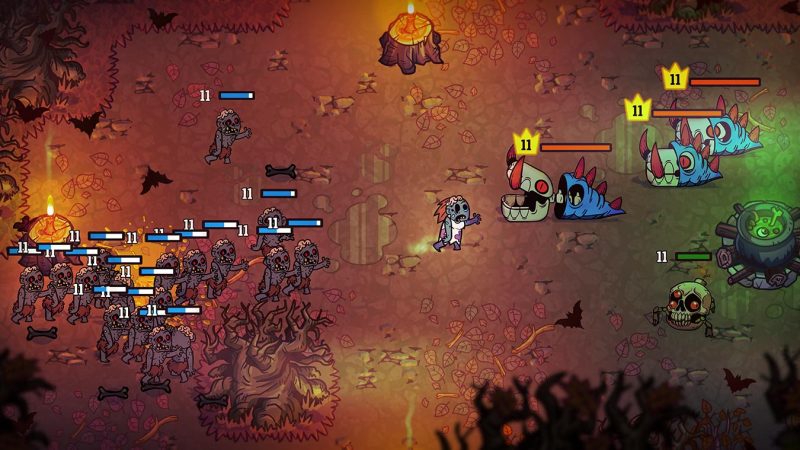 Though the dungeon’s will limit this strategy later on, as they will start to get damage shields so you need to do the certain elemental type to even be able to damage them.

Though this is where the beauty of the multi class system comes into play. Because if you like playing the slug, then you could give it physical based attacks from a different class, so you can continue using it even though normally it wouldn’t be able to deal damage on that enemy.

Of course it is better to switch to different classes, because this will help complete their mini quests so that you can keep unlocking new skills for them. Or in some cases unlocking new classes.

Once you start unlocking different classes, it can be a little tricky to switch on the fly but I didn’t find it that much of a pain. But if you are trying to do it suddenly during battle then it can feel a little clunky.

To unlock a class, you sometimes need to reach a specific grade in multiple different classes, so by using multiple classes it will allow you to progress faster and get some of the really cool abilities early on.

Upgrade tokens can be gained from doing the different dungeons scattered around the map, or from killing enemies as they can also drop the tokens. 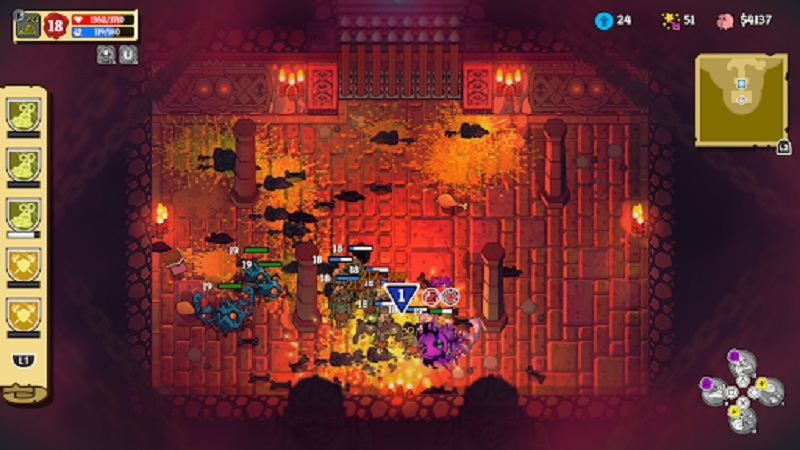 Dungeons are the main content of the game, and they feel incredibly varied and interesting.

They are procedurally generated when you enter, so though they have the same end goal each time you go into the Dungeon it will feel slightly different even if you are going into the same one again.

This can be good, mainly because a few times that I have been into the dungeon it got really tough fast but then next time it was actually a little bit easier.

Though the reverse has also happened. Dungeons can also have debuffs/buffs to make them more challenging such as enemies doing maximum damage or you can only take one hit.

I also found out that with a little bit of practice, you can actually do some dungeons that are slightly above your level if you take enough time and don’t just rush into every enemy encounter. 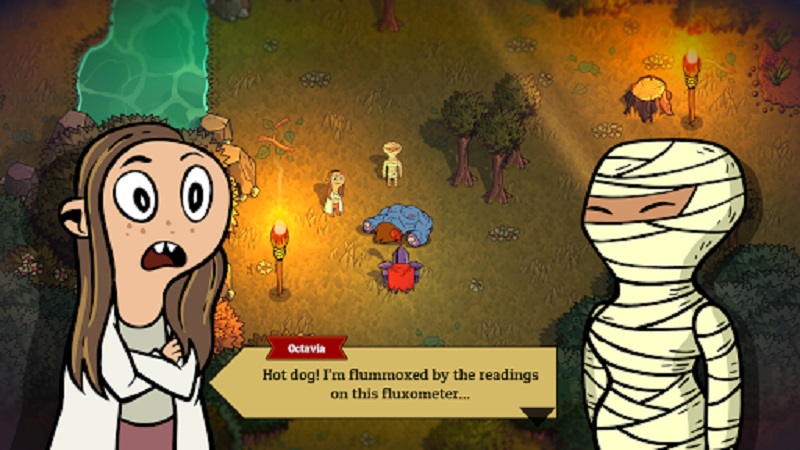 Though I will admit this is using the zombie perk to turn enemies into zombies as mentioned earlier, this probably helped a lot.

The map is very varied, with desert locations, a creepy forest and some wonderful lake areas to explore. The game rewards you very nicely for exploring because there are special faeries hidden around the map that will give you permanent mana buffs, allowing you to use your special actions even more.

There are also side quests that will take you to do different activities round the map, one involved doing a very tough race against an NPC, while another was shooting arrows as the archer class.

A tip I would give anyone playing the game, you will find a shop every so often in front of dungeons or in town’s.

There are some quests that can be purchased from the shop and these quest’s are actually infinite, so you can continue gaining experience points from them, this levels the main character up and helps boost your maximum overall stats.

These quests do get harder each time one has been completed, so it will take longer each time but they mostly involve things that you would be doing during a normal playthrough so will just happen over time if you have purchased them.

Nobody Saves The World is available on PS5 and PS4.

Dead Island 2 Is Confirmed To Be “In Active Development”

Martha Is Dead To Be Censored On PS4 & PS5, Physical Version Also…

Watch over 14 minutes of Hogwarts Legacy PS5 gameplay in…