Super Mario, I mean, Super Onion Boy 2 is a platformer for the Nintendo Switch that wears its inspiration right there on its sleeve. It looks and plays a lot like Nintendo’s famous plumber, but thankfully this comparison works in its favor. The commonalities serve as nostalgic fun, with just enough of its own charm to stand apart. It might be over quickly, but it’s an entertaining ride while it lasts.

Super Onion Boy 2 follows the adventures of our vegetable-based hero as he journeys through 30 levels to rescue his friends. The story is minimal, with a short intro scene depicting evil drones taking off with his pals.

Throughout your adventure, our protagonist makes his way from forests to cities, bringing some neat variation to the level design. The bright, cartoony colors work well to make it a visually appealing experience, with a cute, pixel-based retro style that can’t help but be compared (again) to Mario’s 16-bit outings. This reminiscence pays off since it’s more like an homage than a complete rip-off. It’s one thing to be compared to Mario; it’s quite another to be completely overshadowed by him.

No, Super Onion Boy 2 isn’t as good as Mario’s adventures – this is a shorter affair with generally easier levels. However, it’s also a budget title from an indie developer. It’s been many, many years between Mario’s 2D adventures, making this a great way to capitalize on that absence and give fans something to tide them over.

The gameplay is simple and enjoyable. It’s super easy to pick up and play, jumping right back in where you left off. Each level is littered with coins, enemies, and five collectible stars. Perhaps it won’t come as a surprise that 100 coins yield a free life. The stars aim to give some longevity and replay value to this title, although I was able to collect them all on my first run through, so it didn’t necessarily work for me. Like I said, it’s a simpler affair. In fact, the whole game can be finished in an hour or two if you’re a genre veteran. Younger or less adept audiences may spend more time, with genuinely tougher levels toward the end. It’s never overly frustrating and definitely something to be enjoyed by all ages. 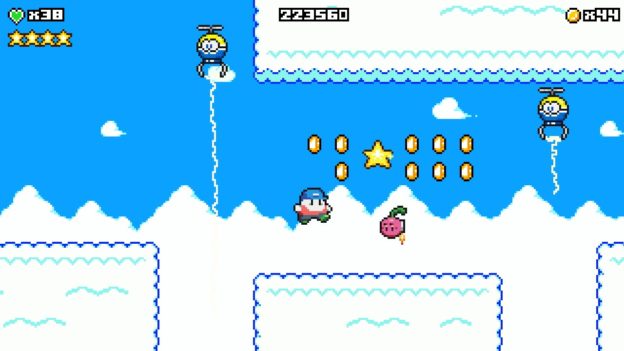 Mario has always featured interesting items to provide our hero with special powers, from Fire Mario to Tanooki Mario. Super Onion Boy has his own unique powers that are really fun to use, transforming our hero into a ninja, wizard, or bubble boy. As a ninja, you can double jump and punch enemies. Wizards can shoot magic at foes, providing a long-distance attack that’s very effective. And as a bubble, you can safely float over large gaps, à la Princess Peach.

There are a few differences between Onion Boy and Mario. For example, you can’t swim – in water levels, you simply jump and fall more slowly. There’s no wall-kicking, either. Interestingly, there is a type of “pipe” you can enter, but rather than make these discoverable secrets, they’re clearly signposted as part of the level. Still, another little nod to our mustachioed hero. 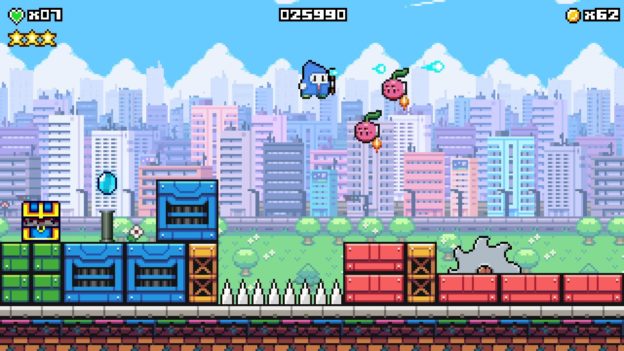 Overall, Super Onion Boy 2 is a fun platformer that I really enjoyed. It seems like a blatant love letter to Mario’s adventures, but rather than detract from the experience, it made it more enjoyable. It’s not difficult and is over fairly quickly, but this budget title should entertain fans for a couple of hours.

Go to the taxi now? Get your money with the current bonuses and…

The manga, directed by Mario, is going to take on the movie Witcher 3