The word “roguelike” is thrown around a lot these days. There’s already a plethora of titles fitting this description on the Nintendo Switch. Vagante, developed by indie devs Nuke Nine, is the latest to take a shot at the genre, throwing in platformer and RPG elements for good measure. How does it stack up? While not perfect, it certainly has its moments.

As with any roguelike worth its salt, Vagante consists of procedurally generated levels. This isn’t my favorite way to play; I prefer to know my levels intimately before conquering them. Having said that, I respect the fact that random levels mean an essentially endless game since you can replay to your heart’s content with a fresh design each time. Well, fresh in terms of layout, at least.

One of the things that lets Vagante down is its lack of visual variety. Aesthetically, the game is quite pleasing, with retro-inspired pixel art that has been tended to lovingly and with great attention to detail. In short, it looks great; it’s just a little on the repetitive side. This is partly due to being stuck in a dark cave for a lot of the game. You’ll be revisiting these caves a lot since death comes swiftly; after all, Vagante is described as a “tough but fair” title.

It’s also a very dark game by design. The washed-out colors and dark tones evoke a feeling of being underground. It’s also meant to keep players on their toes as they explore the ever-changing world, taking one step at a time, never moving too quickly. It helps you appreciate the path right in front of you rather than the entire screen. Unfortunately, it also just makes it plain hard to see, particularly when you’re playing for the first time. Thankfully, you can adjust the contrast, which is a nice form of customization, particularly for vision-impaired players.

There’s no story to keep you motivated. You play the role of an adventurer making your way through a cave in search of treasure. In some ways, it shrouds the game in mystery and suspense: who is the stranger leading your caravan to the cave’s entrance? And just how many heroes is he carrying back there? 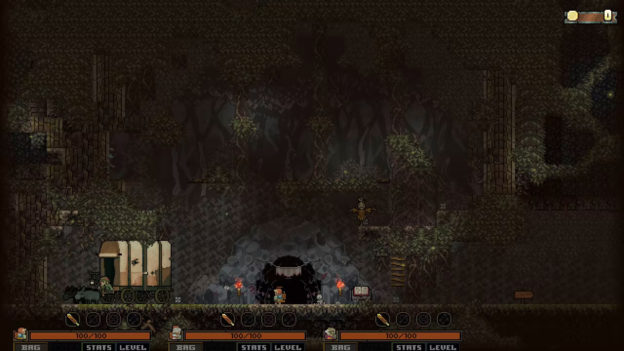 Each run begins by choosing your class from either mage, knight, or rogue. Each performs differently, though the equipment you plunder during a run effectively grants any power to any hero, creating some cool hybrids. And this is where the game is at its best.

There are countless items to uncover during your adventure, from coins to potions, and weapons. There are also enemies, traps, shops, chests, and boss fights, to keep you busy. Your primary goal is to find the door leading to the next level, which can be accessed as soon as you find it. 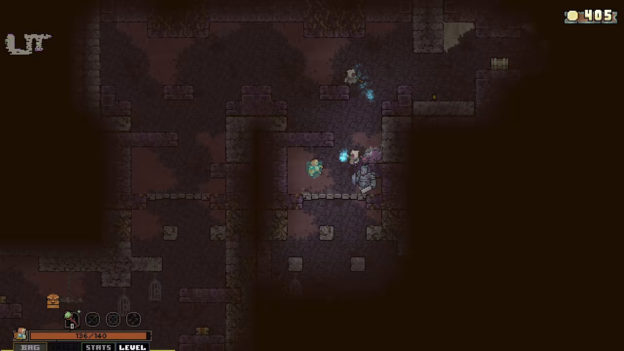 One element I enjoyed was the traps. No, I didn’t love it when a large rock randomly fell on my head and forced me to restart. But when it hit an enemy in a later run, it made me smile, perhaps even cackle a little. Yes, the enemies are just as vulnerable to natural disasters as the heroes, it seems. And that’s alright with me.

Overall, Vagante is a moody roguelike with RPG and platforming elements. It looks neat, if dark and gloomy, and plays well. Though it might not be groundbreaking, there’s enough to keep genre fans busy, with many items to try out as you plunder your way through. It’s a little on the tough side, but that’s also the idea.

First one from Turkey: FUT takes the right place in the VALORANT EMEA…

Among those who have the best team in La Liga in FUT 23 : Best Team…