Rise Of The Third Power PS4 Review – Countless attempts pop up in the game industry of developers trying to reignite that retro energy of 8-bit RPGs. Some do well, while others are a complete flop. Then you get something like Rise of The Third Party, which approaches this genre with a modern twist. While these approaches don’t always work either, the team behind Rise of The Third Party more than deserves applause for its final product.

The game starts you off playing the roles of several characters in different situations, all revolving around the kidnapping of the princess. The bandits, Corrina and Rowan, intend to kidnap the princess in order to prevent an all-out war between the two factions. The mystery behind their actions comes when they say that the marriage efforts between the two factions will catalyze the war instead of bring a lasting peace.

Seriously, the writing takes the cake in Rise of The Third Power. Each character comes across in their own style, and the team behind this game put a lot of effort into delivering each character without voice work. Aristocrats come across with the King’s English, pirates deliver their on libatious phrases, and most of the commonwealth speaks like people do in today’s world.

This doesn’t completely follow conventions of fantasy writing, but the liberties takes bring a delightful flair and modern personality to the old tendencies. 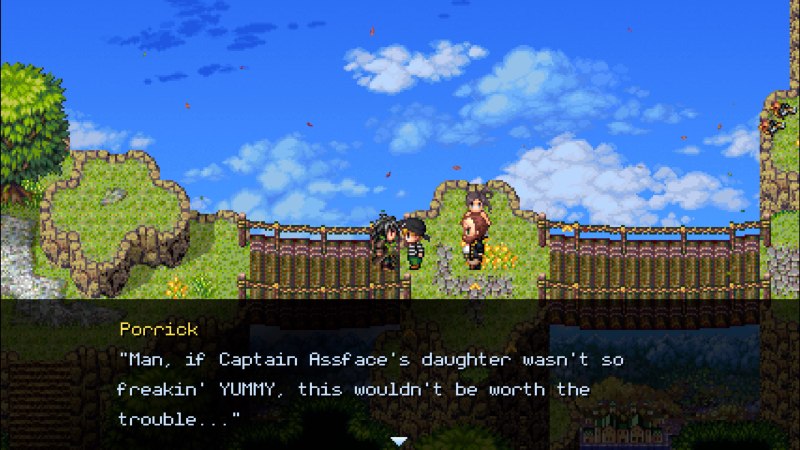 All dialogue comes across in a form mostly found in visual novels: still images standing next to each other. They do a good job of characterizing each individual, which adds to the aforementioned writing quality. At the same time, they look like budgeted artwork. This quickly gets ignored as you grow more immersed in the game, but it takes a bit to get used to.

The first thing you notice upon booting up the game is its sprite work. Though nothing profound, it harkens beautifully to the old Final Fantasy RPGs. Once you get into combat, characters and enemies get a bit bigger with more body animations, truly showcasing the effort put into the sprite work.

Combine that with high-rez animations for attacks, and the combination just excels. Every player attack has some sort of hyperbolized sequence attached to it, which all truly enhance the experience. The one unfortunate side to this is that almost none of the enemies have any attack animations at all. They often just step forward and shake to indicate an attack, which just feels like a lost opportunity. 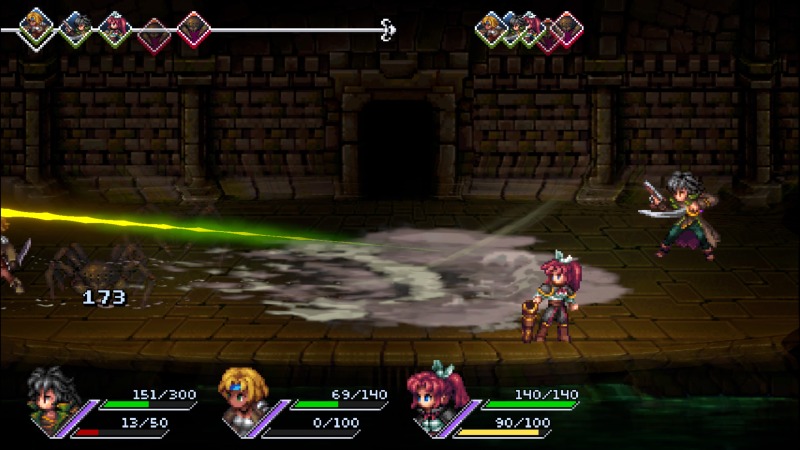 The music lifts combat above and beyond what these encounters do on their own. Most of the music combines piratey orchestral pieces with a hard rock style. The combination is an ideal complement ot the on-screen action, and you will start moving with it while you strategize your next moves.

Combat requires a fair amount of discipline without demanding too much of the player. Each character has specific abilities that come with their own limitations. Rowan, the tank character, drinks booze to heal, but each drink reduces his defense. Corrina issues devastating blows, but she requires multiple turns before using those abilities again.

Knowing which enemy to take out first takes precedence over everything else. Boss fights require you to pick off the additional targets before focusing the big baddie. Fights that involve casters or shield-bearing enemies require different strategies from each other, and sometimes both of these show up at the same time. 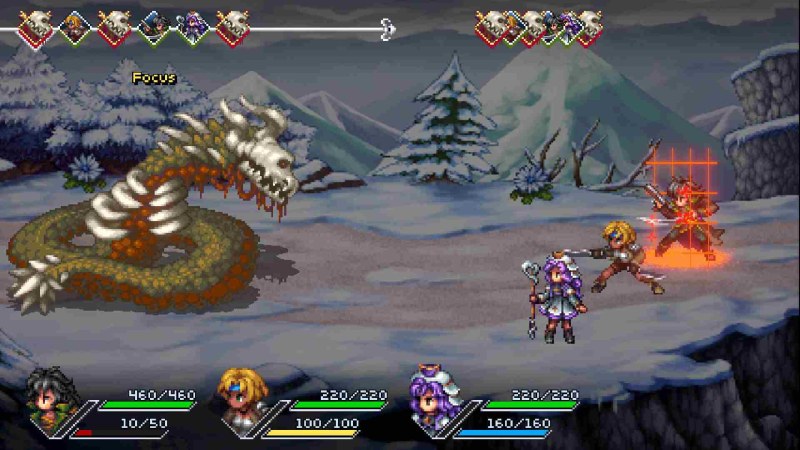 You need to learn how to handle your enemies by managing the strengths and weaknesses of each of your characters. Let me tell you that it just feels so good when the flow of combat goes your way, and recovering from a bad exchange feels that much more invigorating because of it.

Find Your Way Out

Looking back on my time with this game, I realize just how linear the experience was. At the same time, I felt like I discovered the paths I needed to take. The game essentially takes you from area to area, instead putting focus on the locations you explore versus creating a full explorable world.

Having said that, exploration plays a major part in navigating each place you visit. In order to progress to new areas, you need to find ways to open new pathways. All areas act like mini-puzzles, and they never make you work too hard to complete them. 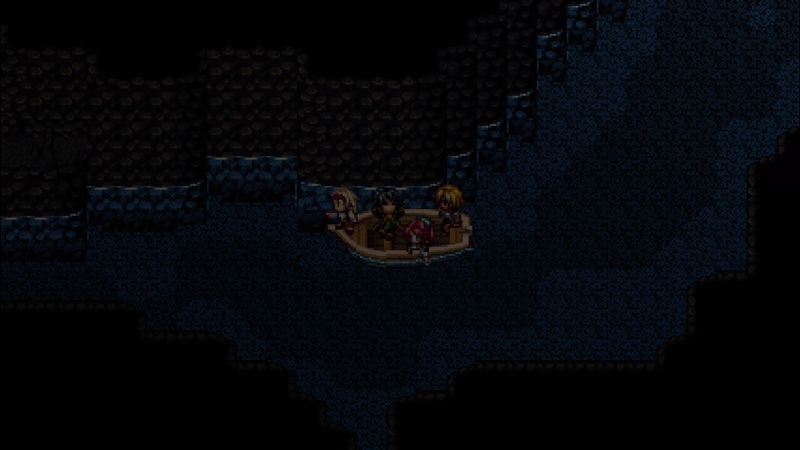 Early on, I struggled to clear some areas just because the pathway didn’t appear readily. A lot of this comes from different pathways between rooms not clearly looking like pathways. Much of the time, they just look like walls. After a while, I learned to look more closely at the borders and the patterns they make to better identify more discreet paths

Obtaining gear only happens when you craft it yourself. At the same time, each character only gets specific items this way. Instead of the traditional gear management in most RPGs, Rise of The Third Power sets a track of craftable gear for each slot. When you get new materials, you use them on your existing gear slot to either create or upgrade that gear.

With this progression system, characters don’t feature much customization when it comes to gear. This may seem like a negative, but that depends on your preferences. You trade gear management, but this puts more of your focus on exploring the world. 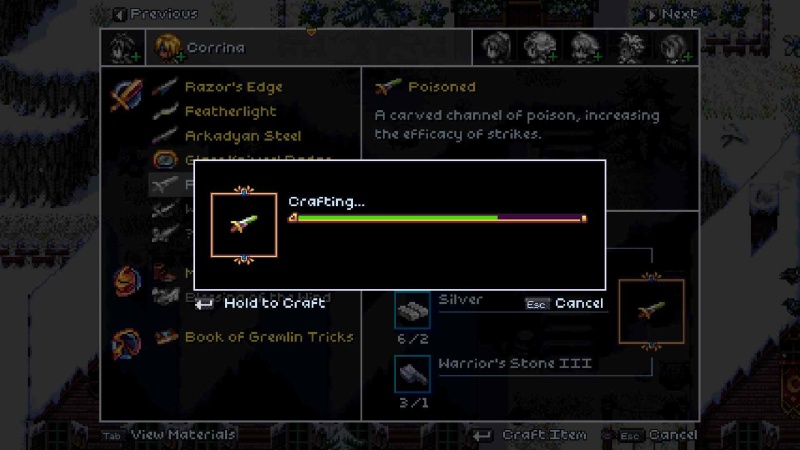 Each character also has its own skill tree devoted to their individual playstyle. These skills prove crucial to beat harder bosses, but activating them requires you choose deliberately. What I mean is that all skill points are shared across all party members, limiting the amount you receive. You need to know what each player brings to combat and what you need more than you want.

Retro-style RPGs are a dime a dozen, but Rise of The Third Power cannot be put among those ten-cent titles. It combines the best of classic RPGs and modernizes them just enough to both maintain the nostalgic integrity while streamlining its progression. You may not buy into the game’s gear and character management, but Rise of The Third Power stands as a must-play for RPG fans.

For Honor Will Be Playable On PS5 Backwards Compatibility, Will Run At…