The King Of Fighters XV PS5 Review – SNK‘s long-running fighting game series is back, and looking furious as ever on PS5. All the fan favourites, from Terry Bogard to Mai Shiranui, have returned for another three-on-three showdown at the King Of Fighters Tournament.

In many ways, King Of Fighters XV is simply a more polished version of its predecessor. However, that isn’t a negative by any stretch. This newest edition of the historic franchise fine-tweaks the much-praised gameplay of KOFXIV, and adds a level of graphical polish that was sorely needed.

Return Of The King 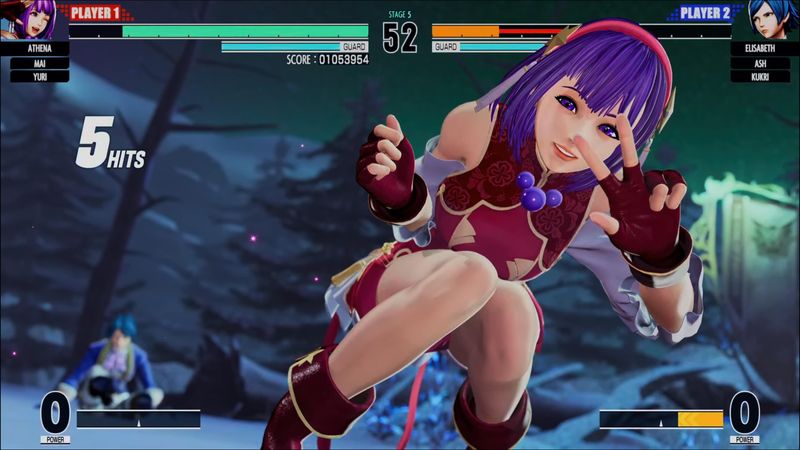 For those who are new to the King Of Fighters series, the game is very similar to the likes of Street Fighter and Guilty Gear. For example, basic attacks consist of light and heavy punches and kicks with directional variants, throws can be performed up close, and various button combinations can be executed to perform special attacks.

However, there are big signature differences, and other small functional ones that gives the King Of Fighters series its own feel. Most notably, matches take place as battles between three-man teams, where character changes happen only on defeat.

In actual combat, King Of Fighters has a few distinctive features. Rush mode returns from King Of Fighters XIV, which enables an automatic super move at the end of a basic combo, upon filling enough of your meter. 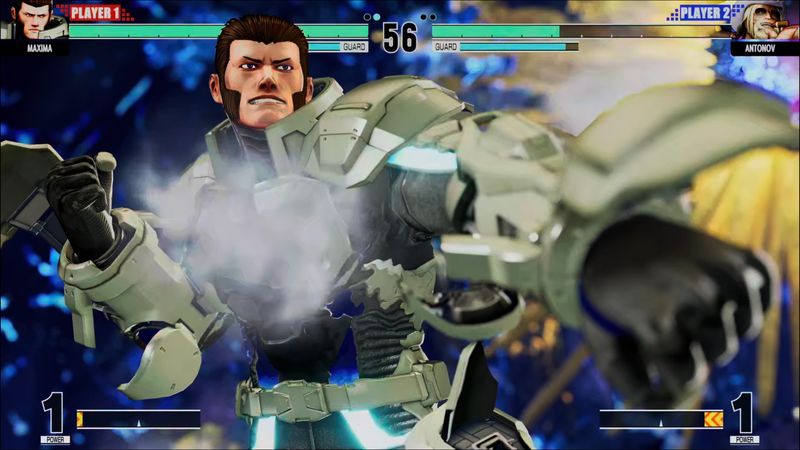 This is great way for newcomers struggling with the more difficult combinations to stand a fighting chance. Otherwise, the ‘power’ meter also functions as a gauge for players to tap in to “max mode.” This is one of the more advanced features of the game, and where specific tweaks have been made for King Of Fighters XV.

Max mode can be activated from a neutral position, or as part of a chain of strikes as a combo extender. In contrast to King Of Fighters XIV, the neutral max mode has been incentivised with increased attack power.

What makes King Of Fighters such a great competitive fighter is in its intricate systems that allow for micro strategies during play. For instance, “cancels” can be employed to chain higher tiered attacks off the back of weaker ones for maximising damage output. 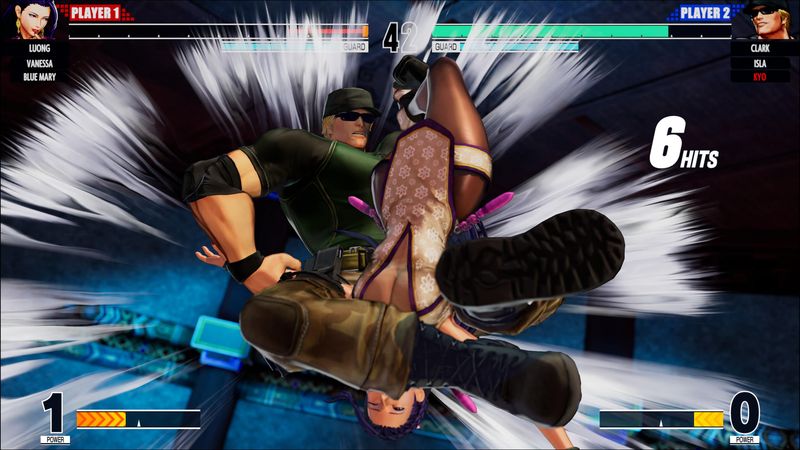 Under pressure, a defending player can also parry a strike at the expense of power meter, to cautiously turn the tables on the opponent. Incidentally, the same button combination can be directionally modified to perform a shatter strike or blowback attack. These can be utilised to either counter and break an opponents guard, respectively.

One of the more interesting features of King Of Fighters XV is how seriously it considers the aerial meta game. Players can perform an unusual amount of jumps of varying lengths. This allows for calculated approaches and evasions in a fight.

However, in the event a jump is a less desirable approach, you can also perform a Smash Bros-style roll with invincible frames. Performing this manoeuvre can evade on-coming projectiles, or perfectly set up a flanking counter attack. 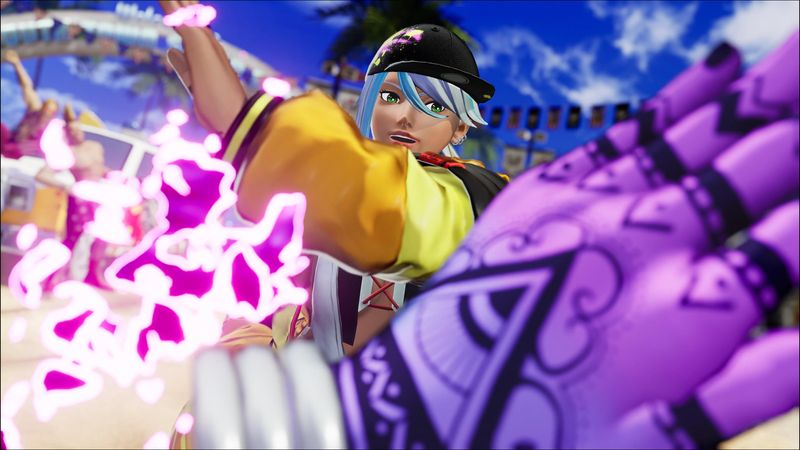 The total sum of all these systems is a core gameplay that is rich in context. Every micro scenario opens a door for strategic play, and with it more opportunities for a flourishing meta game.

Generally speaking, King Of Fighters has a slightly less flowing feel when compared to others of the same genre, and can perhaps take a little time to get used to. Nevertheless, once you’re well acquainted with the style, you’ll have yourself testing your moves online in no time.

A Banquet Fit For A King

In an age where so many multiplayer games are released with pre planned DLC, you can find the initial release is a bit stingy on content. In fact this was our primary gripe with the recent and fellow PS5 brawler, Guilty Gear Strive. 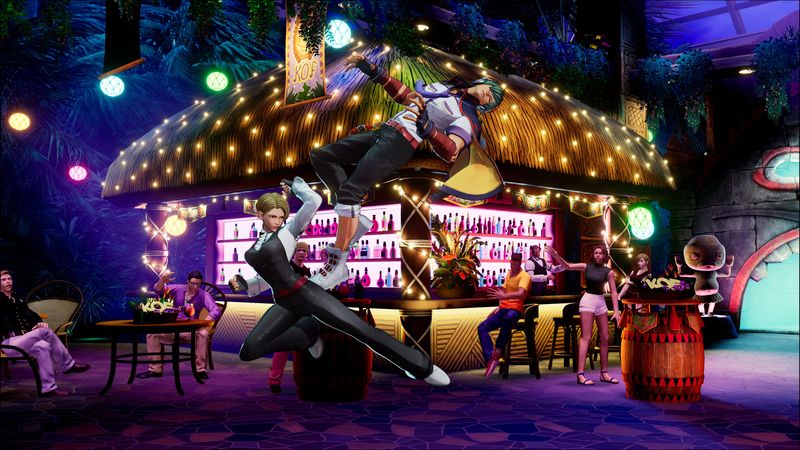 Fortunately, King Of Fighters XV is a very generous offering. On top of a decent number of game modes to choose from, there is also huge roster of characters to get stuck into. Indeed, this probably an area where King Of Fighters shines brighter than similar fighting games.

The whole roster of characters are not only fun to use, but there’s a ludicrous amount of variety to go with. Whether you’re taming the supernatural with hero Shun’ei, sand-shifting as the ominous Kukri, or boxing lyrical with the secret agent Vanessa, you’ll have a unique style of play to experiment with.

Better yet you can take any character into mission mode, where you can practice a list of combos. These can range from useful combo starters into outrageously complicated chains, but offer a great way for people to master a character of their choosing. 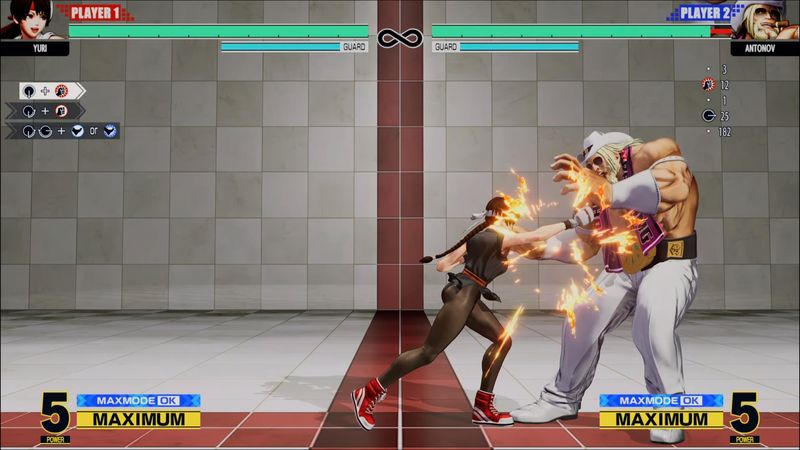 The story mode has everything you need in a fighting game campaign. Character specific interactions, character specific cutscenes, and some bespoke cosmic demon that’s conveniently unsealed at the moment of winning the tournament to fight as a last boss. King Of Fighters XV ticks all those boxes.

The actual story elements are quite light, but it is appreciable to see unique interactions for every team choice you make. Furthermore, there are lengthy ending scenes unique to each team that offer some nice rewarding respite before the credits.

It’s great to see SNK didn’t cheap out on the single player experience. In the enormous online scene of modern times, it must be very tempting to focus on the multiplayer aspects and neglect the old-school offline player. Fortunately, SNK has served both aspects well in King Of Fighters XV. 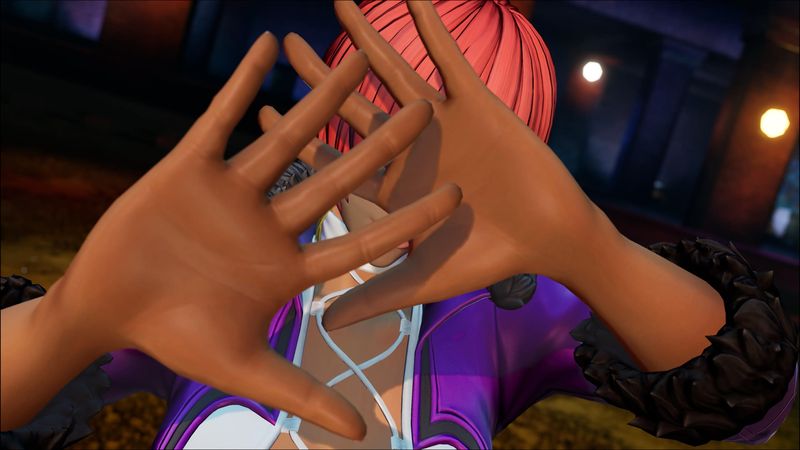 One of the big issues the previous King Of Fighters game had for competitive play was its lacklustre net code. Whereas the online battles in XIV were inconsistent, this time round the newly implemented rollback netcode seems to be doing its job (as of the online beta).

All in all, the package contents are more than sufficient for fighting fans to engross themselves in. Better yet, SNK has finally got King Of Fighters to be a viable competitor in the online space.

The biggest criticism that King Of Fighters XIV drew in reviews was in its graphical presentation. Moreover this has arguably been a longstanding issue for the franchise ever since the glory days of sprite-based characters. 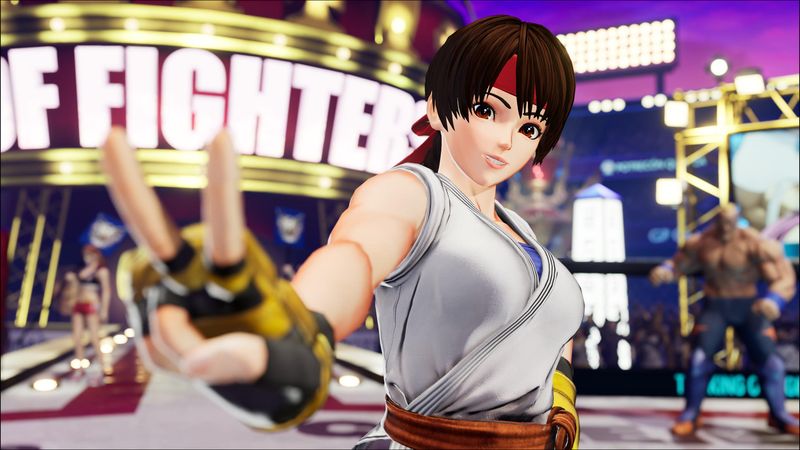 In contrast with King Of Fighters XIV, which looked a generation behind its release, XV’s graphics are appropriately adequate for this extended cross-gen period between PS4 and PS5. However, you wouldn’t call it a work of art.

The cel-shaded anime style character models look lovely enough, but not especially awe-inspiring. When compared to the likes of the recent Guilty Gear Strive, or even the six-year-old Street Fighter V, the animation doesn’t particularly stand out.

In addition, the general alpha effects of King Of Fighters XV just don’t feel as epic and powerful as what you might experience in other fighters. This isn’t to say that King Of Fighters XV isn’t an enjoyable spectacle; SNK’s scrapper perhaps just struggles to capture your sense of wonder where others may succeed. 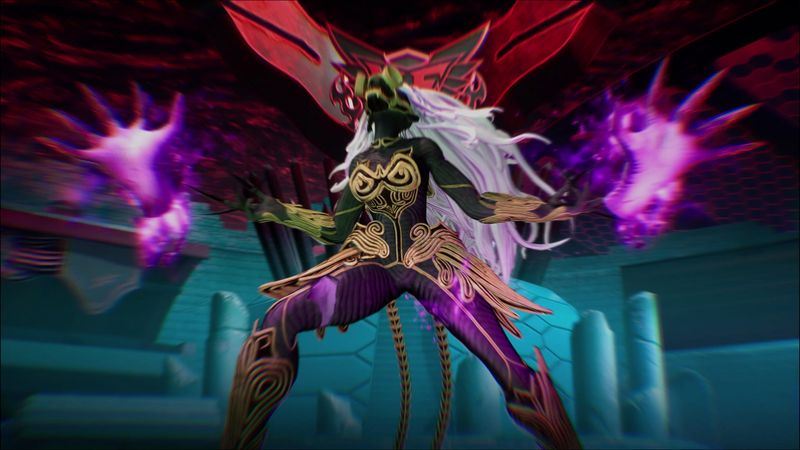 The King Yet To be Crowned

SNK deserve praise for what they’ve delivered in King Of Fighters XV. Every previous criticism of the series has been duly responded to, and the end product is now exactly what fans of the series would want.

Everything from the aesthetic to the online play has been polished to a standard that long-time players can be proud of. Additionally we can be happy with the offering of content that’s granted on day one in the face of future DLC.

Whereas the visual presentation is head and shoulders better than what the series had been, there’s still the sense that this is an area that could improved on. Nevertheless, it’s a big step in the right direction for SNK, and King Of Fighters is once again a big hitter on the fighting scene.