Trek to Yomi is a side-scrolling samurai adventure that plays out in black and white and will launch onto Game Pass. Kes reviews Hiroki’s attempts to repel invaders on a voyage through the gruesome reality of the Edo period and the trippy shadow world of Yomi.

Trek to Yomi is going to find it hard to avoid comparisons. I don’t mean to be presumptuous, but people are going to be throwing every samurai-related thing they know at Leonard Menchiari and Flying Wild Hog’s new side-scrolling adventure. A film buff will point out the 50s and 60s Kurosawa influences it lovingly wears on the sleeves of its haori; an aesthetically-charmed hipster will laud the monochrome scratched film reel art style it plumps for; also, you just know the PlayStation lot is going to make a nod to Ghost of Tsushima. I will probably do a bit of that too over the course of this review, but it is a testament to Trek to Yomi’s style, pace, and gameplay that it manages to overcome the gravity of these distracting comparisons and become a video game that is very much Trek to Yomi. This is a fantastic little game with an abundance of style and character, with solid gameplay hooks that are only slightly let down by a simple story and restrained combat.

The premise of the narrative has been done before, but it executes its broad narrative strokes well. You take on the role of Hiroki, a young samurai-in-training whose village comes under attack by a warlord called Kagerou during the Edo Period of Japanese history. As a boy, Hiroki watches his people suffer after an attack — one that costs the life of his mentor Sanjuro, but deepens Hiroki’s relationship with Sanjuro’s daughter and skilled strategist, Aiko. This is a classic revenge tale that will take you through the literal hell of Shinto theology and back.

Ultimately, Trek to Yomi never manages to exceed well-trodden narrative paths over the course of its five-hour story. The truncated length is a major strength in gameplay (more on that later), but it instils some narrative weaknesses. It blunts the developer’s ability to create a meaningful empathetic relationship between player and character. You will see villages fall and feel very sorry for all the screaming peasants, but there isn’t any personal investment there — you simply don’t have time. Likewise, Hiroki has to consult his inner moral compass during a trippy time in Yomi — a twisting nightmare world that reflects upon Hiroki’s reality — but it doesn’t find footing on an emotional ladder. The game raises questions about the culturally ingrained sense of honour of Japan, the idea of living up to lofty expectations, who one should look after in their life, and what motivations one should have for doing so, but they aren’t really explored in a meaningful way.

Don’t get me wrong, I love minimalist storytelling and the wonderfully sparse stories from the samurai media to which the game pays homage — but Trek to Yomi’s own narrative is, unfortunately, a bit shallow and Hiroki is a cardboard cut-out samurai figure. In fact, the most interesting character of all — Aiko — is sidelined completely. The character description in the review guide offers a fuller understanding of her motivations and personality than the game itself. All in all, the core narrative is the weakest part of an otherwise great game.

Aesthetically though, Trek to Yomi is outstanding. The monochrome overlay feels straight from the vintage cinema screen — complete with the film grain that gives this world real texture. This is no gimmick. The crisp and clean use of the palette breathes more colour into the world than, y’know, actual colour. Throughout, you can see that from concept to finished product, developer Leonard Menchiari had been playing with light in a totally unique way. Shadows loom large and cast monstrous inky darkness across your screen that feels imposing, especially in the underworld of Yomi. One secret room I came across used the sun beaming through an open wooden-slatted window to create a grate on the floor, the light and shade of which were inverted by the actual opening in the wall. Through the gaps, you could hear an eerie chanting of an army — one I didn’t even see, but the scene frightened me silly nonetheless.

There are outrageously good environmental chops on display here, too. Villages are constructed with awesome details but remain highly stylised without losing sight of the period. The three underworld levels in Yomi are a masterful bit of imagery with their strange portals, imposing lighthouses, allusions to mythical creatures, and freaky hands. When Trek to Yomi starts playing with the underworld rules, it excels even further. The world design and the way the game moves you through it is nothing short of exceptional, and — vitally for player interest — only possible via the medium of video games. It uses static 2D planes to move across during combat, before opening up into set-camera 3D spaces to explore. To make everything dynamic, background, foreground, and play space will all interact seamlessly. Trees fall from the background into your path, dead bodies float down the river into your view, and a lighthouse goes from being back over there to the thing you are climbing up. It is genius — absolute genius. It is technically smart, made with heart, and presents some superb art. 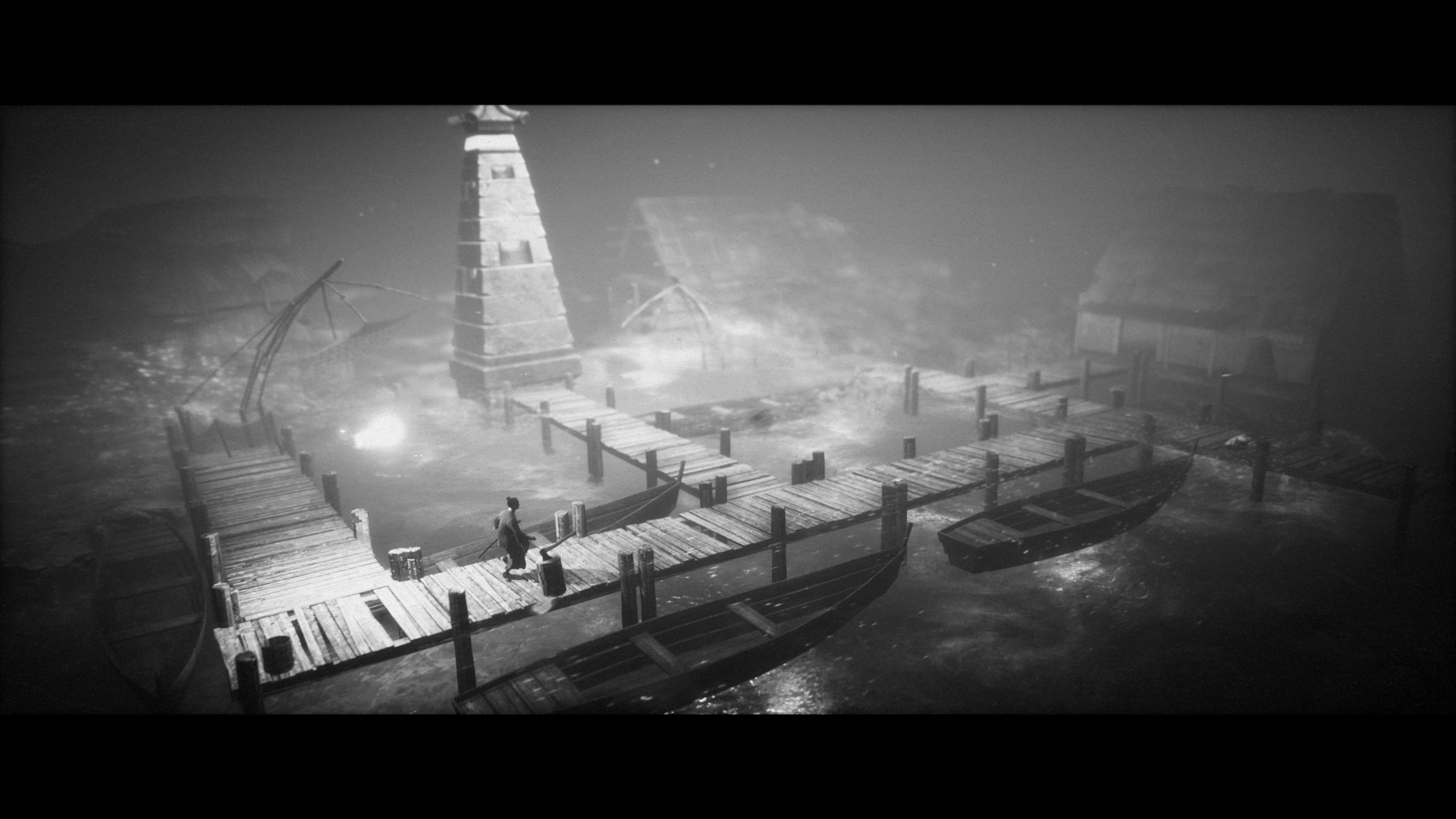 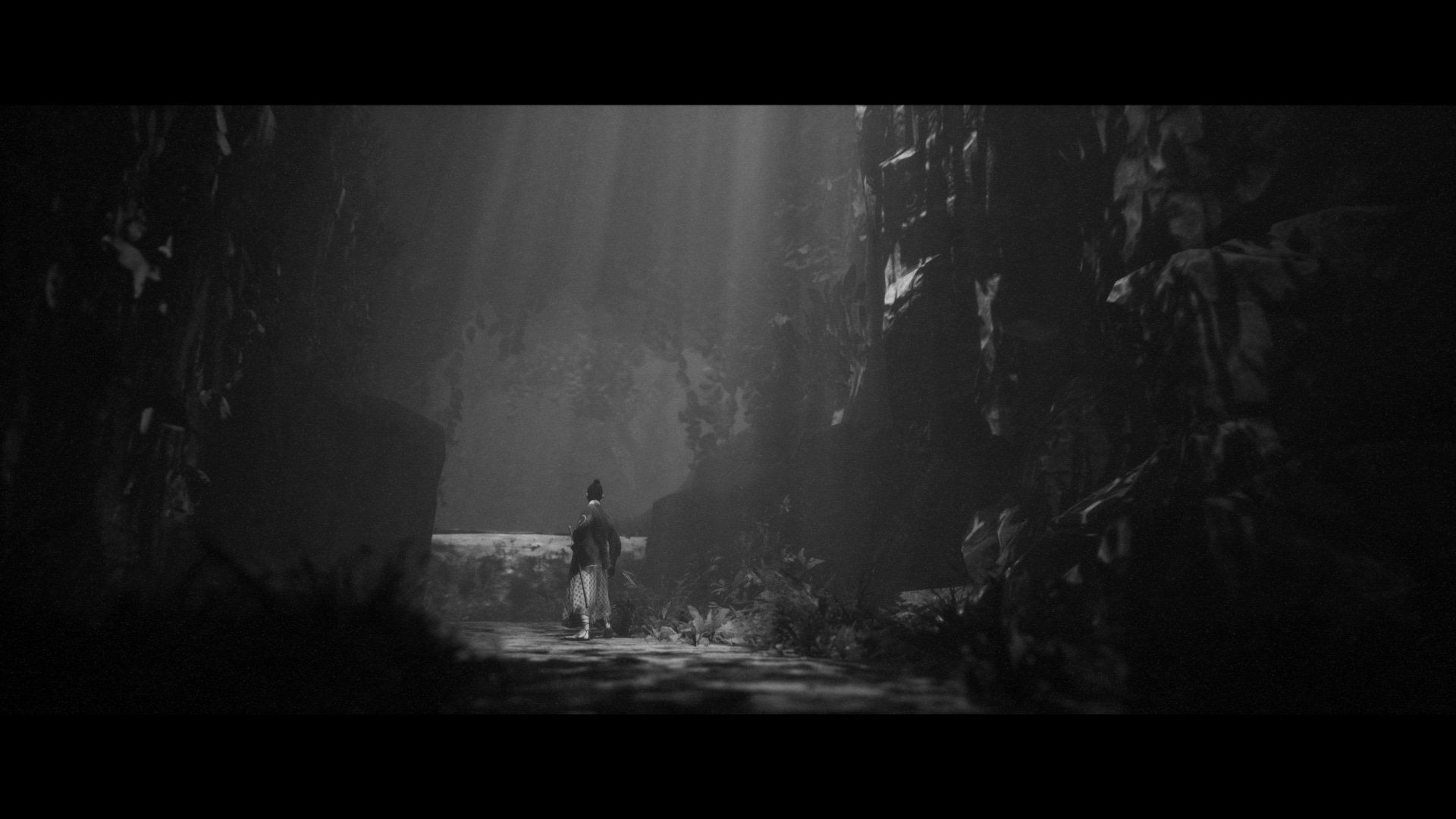 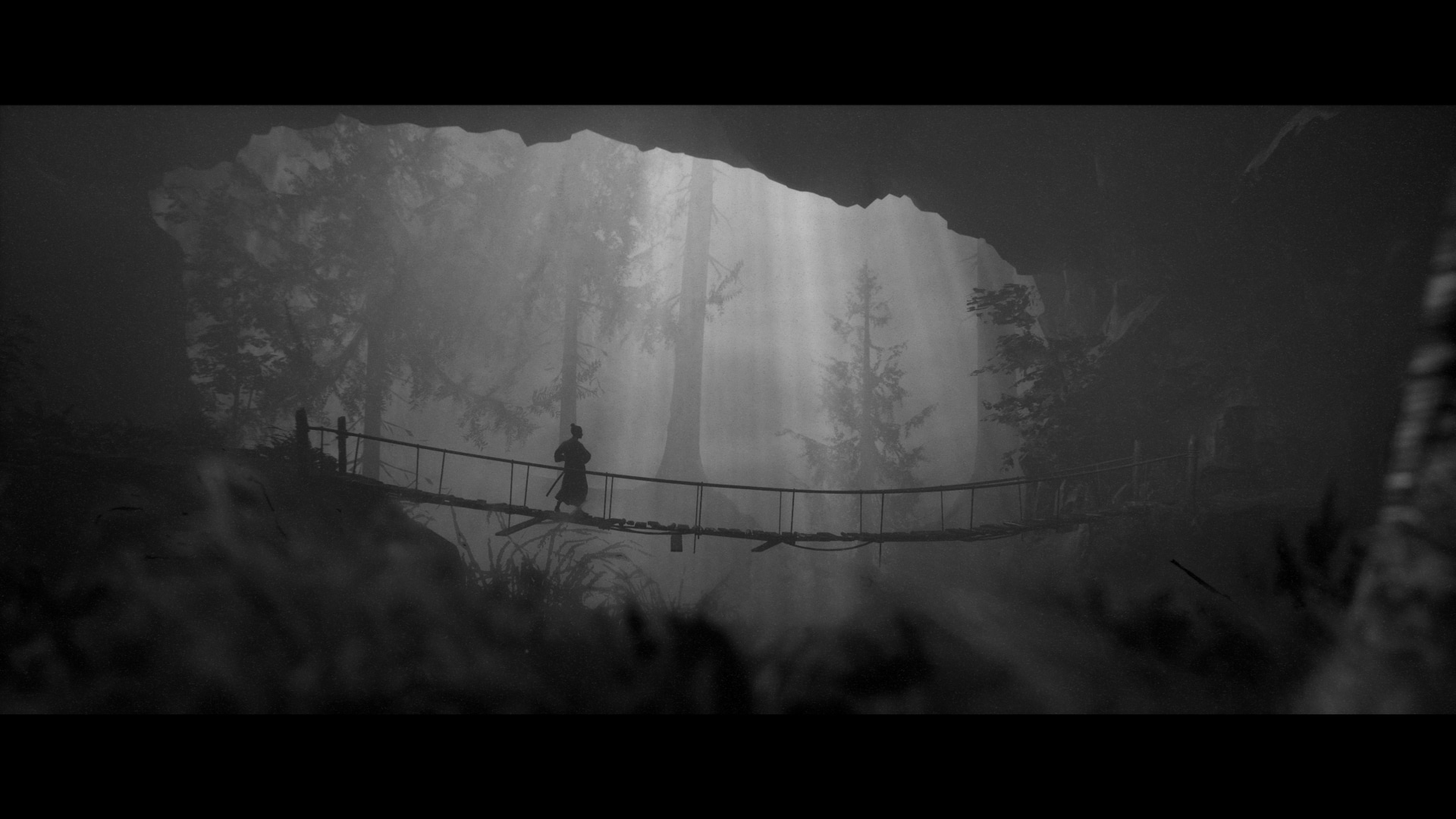 That makes the world of Trek to Yomi a joy to explore. Each level is linear, offering a basic A-to-B across a single plane with small offshoots here and there for collectables. The changes in camera angle can be disorientating, but you do get a feel for how things are going to change after a level or two and you don’t exactly have that much scope to get lost. With the soaring music, outrageous art design, and exciting emphasis on messing with your expectations, you couldn’t ask for much more. This is pretty and satisfying exploration. As an added bonus, its short length doesn’t extend sections unnecessarily. This makes Trek to Yomi moreish with plenty of replayability as you hunt for deviously hidden collectables, try for the three different endings, and give the surprisingly easy one-hit-kill difficulty called Kensei a go.

Each gorgeous exploration area is normally linked by an equally sexy 2D combat scenario. As a samurai, learning the way of the sword is essential. Heavy attacks are on Y, light attacks on X, parry on LB, and direction inputs alter left or right positioning. That foundation is built upon throughout the game with a series of combos that you can use. This is supplemented with ranged weapons to give you an advantage over certain enemy types. There is a good variety on offer here, with armoured enemies, guys on horseback, tricky samurai figures, spirits, and more to keep the entertainment coming. Every level ends with a unique boss. 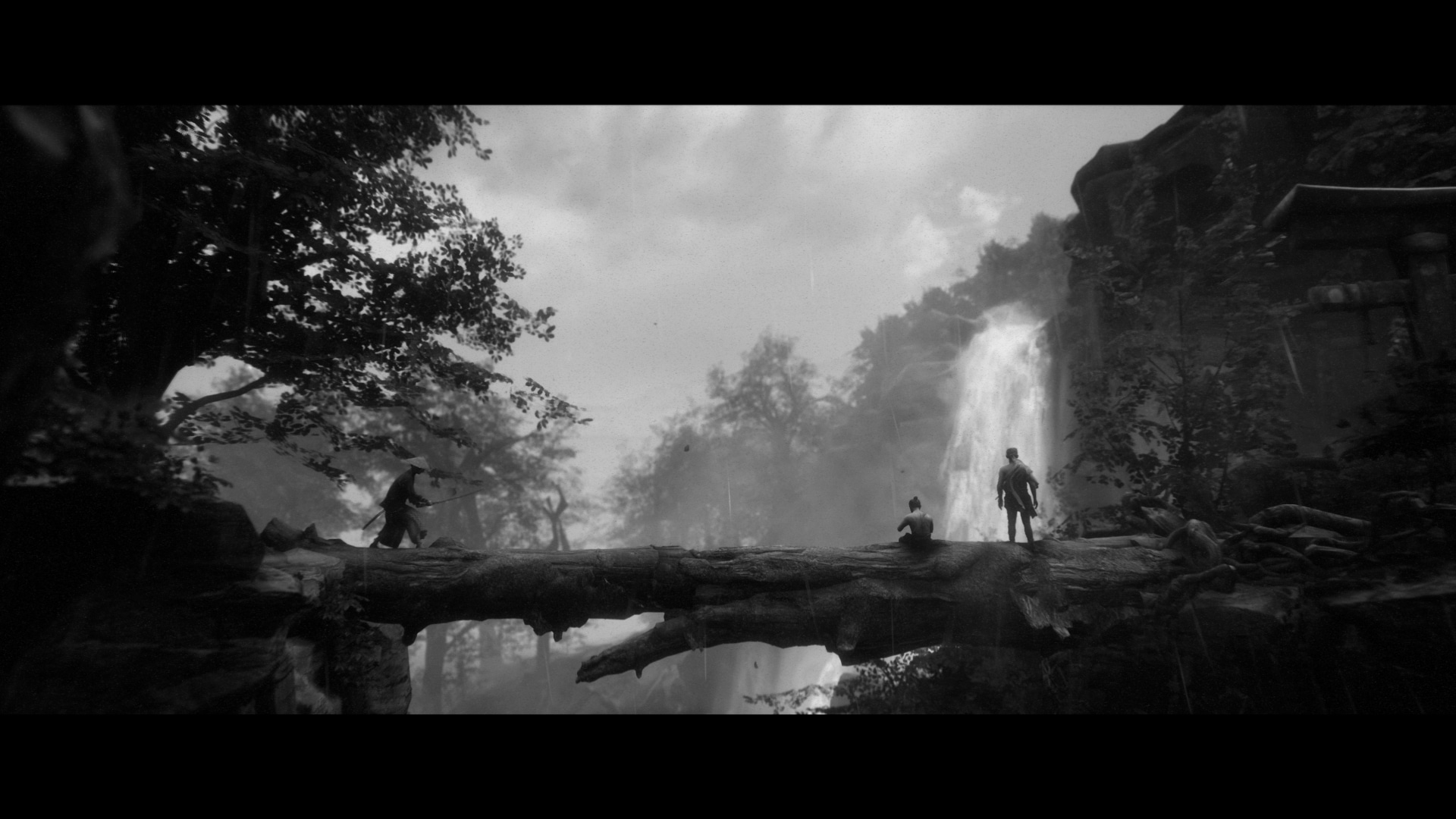 The variety of combat scenarios is good and nailing sections feels great once you get the hang of it. That short game length really helps keep everything fresh, and you on your toes. There are plenty of combos to get to grips with and I found a few that I didn’t deviate from. Rather smartly, the game doesn’t just throw endless enemies at you to make something trickier. Instead, it offers much more measured fights that require tactics over pure ronin-rage in the most beautiful Kurosawa-esque staged environments. The boss battles, in particular, are really good fun and give you a major mix in the formula just when you feel comfortable.

If anything, I didn’t feel challenged during my time with Yomi in a full normal mode playthrough, nor did I feel like it gave me the opportunity to fully explore all of its combo mechanics. The one-hit-kill difficulty — which I am a few levels through now — is surprisingly a bit easier than the hardest difficulty because you don’t have to hit enemies multiple times. This removes the need to spend time with combos, though — required reading even in normal difficulty. I’m looking forward to a final run in that baseline hard difficulty, which I imagine will be where the true complexity arrives. It’s a bit mad that it might take me three playthroughs to find a chance to explore my samurai abilities fully. To conclude: combat has great underlying systems with plenty of depth and variety, only hiding your opportunities to explore it fully.

How hard are the Trek to Yomi achievements? 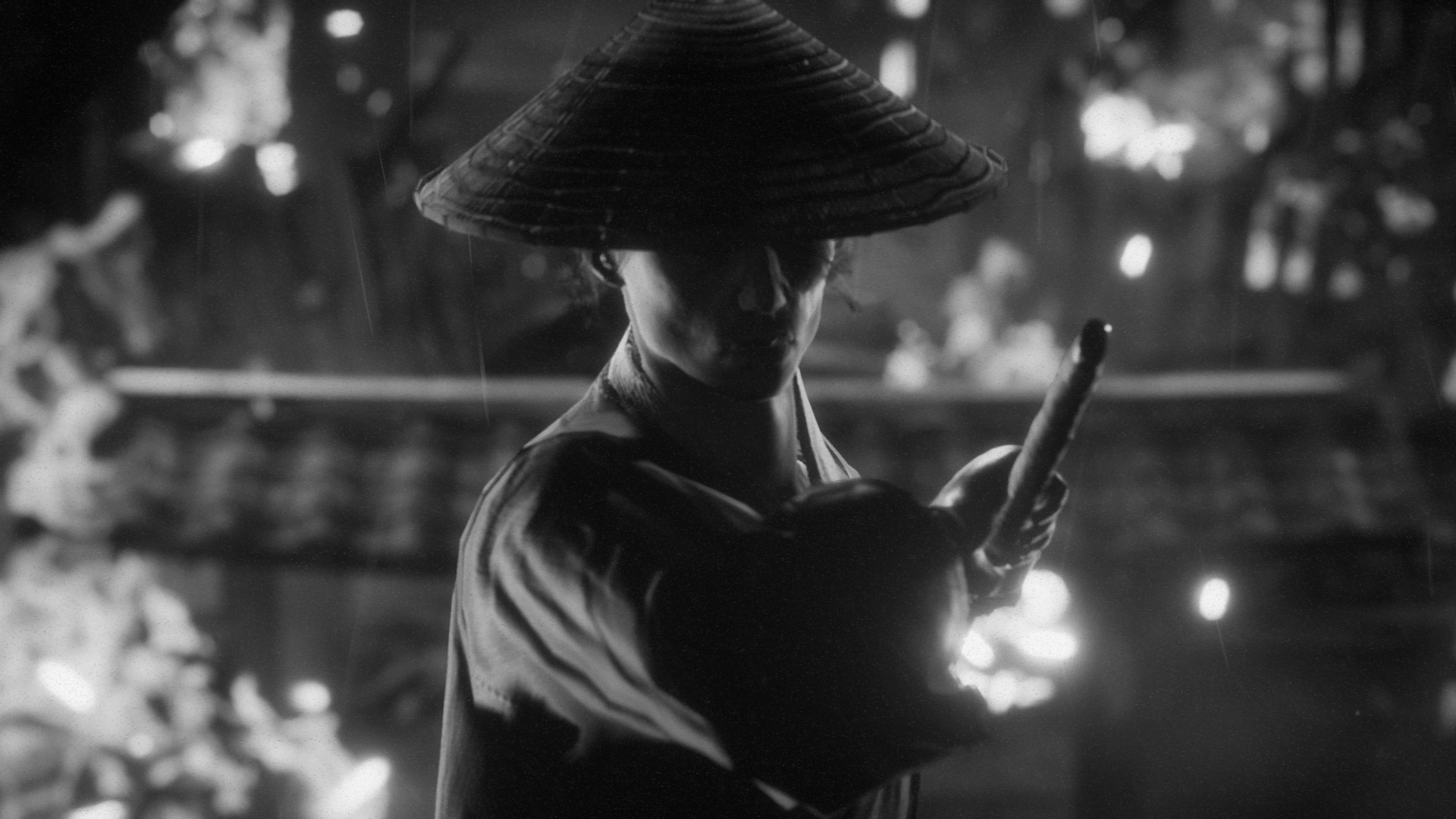 The Trek to Yomi achievements might be set to cause a bit of furore amongst a few of you. There are no save states or chapter selects in the game, but there are achievements for getting all collectables and health upgrades. With a guide, you’ll be fine, but you’ll still have to play three times to unlock all the endings. On top of that, there are achievements for the Kensei difficulty, which is a one-hit-kill deal. This difficulty is fine in normal play, but those bosses require learning because while they can take multiple hits, you cannot. Playing in Kensei will help you pick up the achievements for beating the six bosses without being hit. One requires a level playthrough with no checkpoints or deaths — so slap on easy mode and go for that first level. So, nothing spectacularly hard, just finicky and made a bit more irritating by the fact you can’t just experience all three endings via a chapter select function.

Trek to Yomi embraces its samurai-cinema influence, but rises above imitation to become a pure embodiment of all the cogs that make the genre tick. This side-scroller is fantastically stylised, perfectly paced, and precise in action. While the story might be lacking in innovation, the world that contextualises it is magnificent — layered with details as it guides you around a horrifying reality and a trippy Yomi underworld in a way that could only be achieved in video games. The solid and gratifying combat system is perhaps not fully explored, but any mistake in Trek to Yomi is whisked away by its brisk pace complemented by a great artistic vision. Trek to Yomi is a katana-sharp experience that impresses with its flashy skills — use the joyous time it gives you well.

* Kes spent six hours with Trek to Yomi in normal difficulty nearly sobbing with jealously at the artistry he was witnessing, and a further two hours actually sobbing trying to defeat the bosses in Kensei difficulty. For a full completion, one would have to complete it three times — but Kes managed 14 out of 28 achievements in one and a half. The review copy was provided by the publisher and played on Xbox Series X.

Details of the closed beta of DRAGON BALL: The Breakers the asymmetrical PvP game of the Dragon Ball universe

ICYMI: a weekly round-up of the biggest Xbox news stories from…