UK police have arrested a 17-year-old on suspicion of hacking, and it’s been reported that the arrest is directly linked to the recent GTA 6 hack that saw 90 early gameplay videos of the open-world game uploaded online.

The City of London Police, in connection with the UK’s National Cyber Crime Unit, have arrested a 17-year-old from Oxfordshire “on suspicion of hacking,” and it’s being claimed that the arrest is linked to the hacks on Rockstar Games and possibly Uber.

Ex-Reuters journalist Matthew Keys claimed on Twitter that a source has confirmed that the arrest is “related to intrusion on Rockstar Games and possibly Uber Technologies.” Keys also says that the arrest of the 17-year-old “was done in concert with an investigation conducted by the FBI, according to a source with knowledge of the matter.” 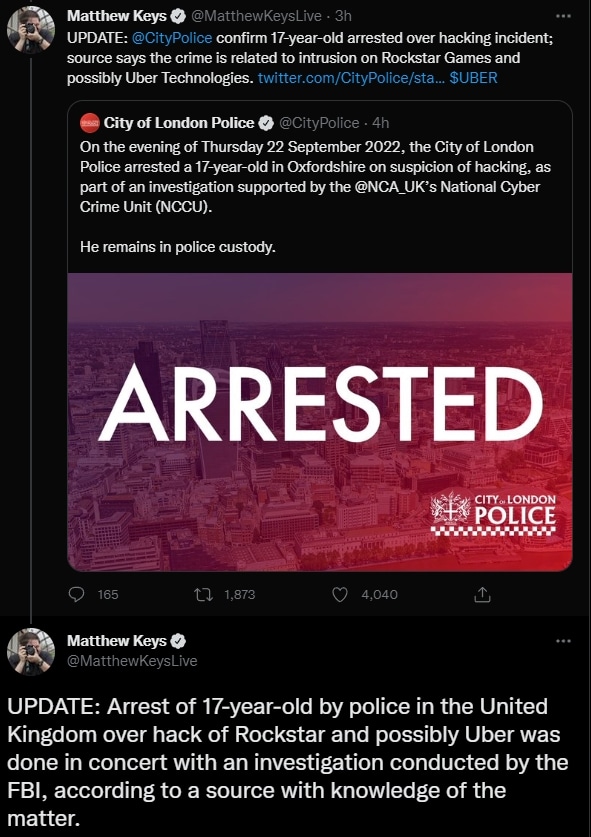 Earlier this week, Rockstar Games confirmed that an “unauthorised third party illegally accessed and downloaded confidential information” from its systems. Shortly after the GTA 6 leak, Uber released a statement concerning a recent cybersecurity incident of its own. Uber linked the security breach to hacking group Lapsus$ (though this is not confirmed), which is also believed to also be behind the Rockstar Games intrusion. Uber said it was “in close coordination with the FBI and US Department of Justice” on the matter.

My Toxic Relationship to Sham of The Century Game

FIFA 23 Launches to a Historic Moment for the Series

These Ubisoft DLCs Will Disappear From Stores on PC

Crash Bandicoot 4: It’s About Time has been rated for Xbox…

Guide: How To Update Your PS5 System Software